In 1831 approximately 20 students at the University, whose identities are lost, came together to form what would become The Washington Society. The founders sought to create an organization endowed with the name of the “illustrious father of American liberty” so that “it may animate us with the desire of using the power here attained, for the good of our country, and the weal of our countrymen.” The promotion of the oratorical arts would become the foundation upon which the new society would build its values and character. 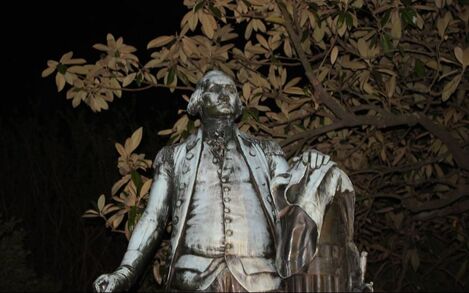 The statue of Washington found next to the Lawn.

After its founding, the Society continued steadily but inauspiciously until it disbanded for the Civil War, even though UVA remained in operation for the duration of the conflict. The Society was reestablished in 1865; this lapse is referred to as the ‘First’, or ‘Minor Interregnum’. This new period proved fruitful for the Society, as Washington Hall greatly expanded and friendly competition with the Jefferson Society began.

From 1869 to 1917, The Wash flourished in a period now considered to be the Golden Age. During this time, the Society gained its somewhat irreverent reputation, and by the 1920s a decline in the gravity of debates is matched by frequent meetings in the Madison Hall Smoking Room. Following the stock market crash of 1929, the Society disbanded for a second time, in what is now called the 'Second' or 'Major Interregnum'. The Wash resolved to meet again at the call of the President – a call that would not come until 1979.

The second revival of the Society is credited to the many efforts of Mr. Davis, Mr. Henson, Mr. Huntoon, and Mr. Aberman. To do this, per constitutional requirement, they had to be inducted by a member remaining from the 1920's; luckily, such a member existed. His name was R. E. Heischman and, as a member of the Wash before the Second Interregnum, he was able to induct these men, successfully reviving the Society.

A year after the refounding, the first female Wash president (and first female member), Leslie Eliason, established many features of the Wash that are still present today. She created the weekly Thursday meetings, secured Jeff Hall for meetings (the previous meeting place, Wash Hall, has since been turned into the University of Virginia's Office of Equal Opportunity Programs), and established the Wash as an offical CIO of the University of Virginia. 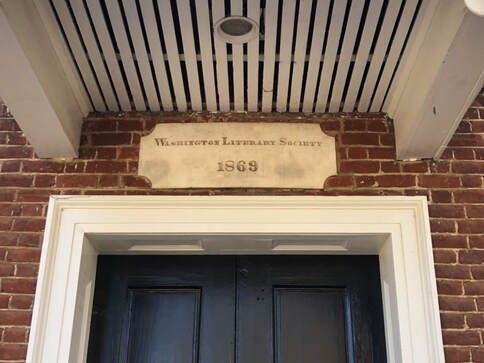 The plaque above the doorway of the original Washington Society building.

"​Quam fluctus diversi, quam mare conjuncti."
This Latin phrase, which is chanted in a call-and-response format at the beginning of each meeting, translates to “although the waves are many, the sea is one,” representing the idea that each member of the Wash is different yet we are all united as we come together as one society.
"Exitus Acta Probat"
This phrase means “the end justifies the means.” It is found on the coat of arms of George Washington’s family which the coat of arms for the Wash closely resembles.
"Get Involved and Speak Out!"
In the spirit of protest in the 1970's, Wash members began using this signature phrase.
"Sigma Beta Phi, Conquer or Die!"
​This is a chant is a rallying cry, often used during competitions. It uses the society’s Greek letters, ΣβΦ.
QUAM FLUCTUS DIVERSI, QUAM MARE CONJUNCTI
Powered by